I LOVE PU – Our Lady of Graces, when the town of Pesaro was saved from Plague 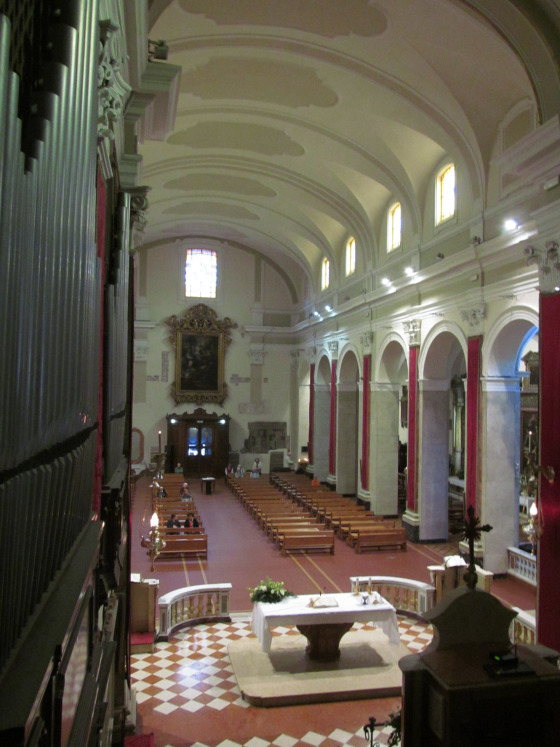 That is roughly the story of Madonna delle Grazie: a sanctuary was erected in Pesaro in 1481 when Servi di Maria (Servants of Mary – Servite Order) started building a church and a convent, on a land donated by Costanzo Sforza, which could host the painting of the ‘blessed Virgin Mary of Graces in Pesaro’ – a copy of the Madonna by Antoniazzo Romano, woshipped at Santa Maria Maggiore in Rome, that Alessandro Sforza had given to the city of Pesaro. The sanctuary, whose construction started on May 17th 1481, was consacrated on May 24th 1496. In 1506 the church was enlarged and in 1513 the altar mayor was finished. However, the wooden Madonna delle Grazie was destroyed by a fire in 1545. A painter from the nearby Fano, Pompeo Morganti, painted then a new icon of Saint Mary of Graces (oil painted on three walnut planks): this is the icon we still venerate today.

On April 8th 1855 a cholera plague spread out in the town of Pesaro. The town magistrate turned to the Blessed Virgin of Graces and, on June 21st, ordered to move the icon to St. Francis street where a solemn function was held. Apparently the plague left the town and on October 21st 1855 the first ‘Vote Feast’ was celebrated. Since then, Pesaresi celebrate Madonna delle Grazie on the third Sunday of October.

After WWI the town of Pesaro underwent major construction works. The Servants’ Church was listed among the buildings to demolish. In 1922 the Curia gave the church of St. Francis to the Servants of Mary with the obligation of placing the icon of the Madonna of Graces inside. After 421 years the holy image was transferred to St. Francis curch with a solemn procession . St. Francis church was built in 1270 and the nearby convent in 1325. As a matter of fact, during their dominion the Malatesta family (1285 – 1445) supported the mendicant orders of St. Francis, St. Dominic and St. Augustine. In October 1925 the icon was placed in the marble little temple built by pesarese Alberto Montanari.

On July 31st 1944 the Germans forced the clergy to leave the town, so the Servants of Mary moved the holy icon to Trebbiantico on a hearse (!) – the only vehicle available. On August 27th the sanctuary was destroyed by bombings. On June 9th 1946 the Madonna delle Grazie got back in St. Francis church where She is still venerated today.

Pandolfo II, who governed from 1355 to 1373, was responsible for radically restructuring the church, probably also including the portal, between ’56 and ’73. During the eighteenth century the building underwent a radical transformation, both inside and out. Rebuilding of the convent began in 1771 and was completed in 1805; the design was by the architect Giuseppe Tranquilli of Pesaro, a pupil of Vanvitelli.

What remains of the Malatesta building today is the white stone and red Verona marble gothic portal. Inside the church are two stone sarchophagi commissioned by Pandolfo II, one containing the body of his second wife, Paola Orsini, the other that of the Blessed Michelina Metelli (1300-‘56).

The feast of Madonna delle Grazie is equally cherished by Pesaresi as it is the Patron Saint Feast (San Terenzio) on September 24th.

Following are a few pictures we took yesterday. Enjoy!