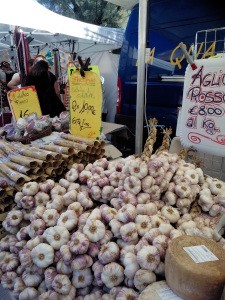 When our daughter Costanza asked me to get her two goldfish at San Nicola Fair last year (see attached picture and note my half skeptical/half amused smile) I seriously doubted they would make it to Christmas. And yet here they are, one year later, in their new bowl bought at San Nicola Fair this year (see the other picture below… not the close up plastic fish: the two in the back!).

The fair – entitled to Saint Nicholas (celebrated on Sept. 10th according to the Roman Catholic calendar) – is to me, and to most Pesaresi, the turning point between Summer and Fall. Grandparents give money to their grandchildren – as they do for another largely attended pesarese event: the Harbour fair – to buy candies, a toy, a balloon. 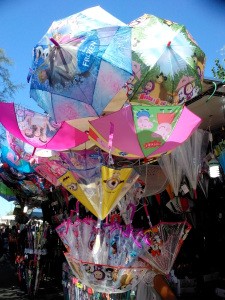 When my sister (auntie Chicca) and I were in our teens – I mean, when she was in her teens; I’m the younger of the two 😉 – we used to go to San Nicola fair and sell jewelry she would made using beads. We even sold painted tiles (mostly using Peanuts characters) and painted cotton bags. My father used to rent us a regular space right in front of the Cruiser Congress Hotel.

Time has gone by since then, and yet San Nicola Fair is still a highly attended event. This year (the fair lasted 4 days from Thursday, Sept.10th, to Sunday, Sept. 13th) more than 300.000 people walked through the main streets along the seaside peering at over 600 stalls.

Starting from via della Repubblica (leading to the bronze sculpture by Arnaldo Pomodoro), both viale Trento and viale Trieste displayed all kinds of goods: from the typical Italian onions and bulbs of garlic to local cheese as ‘pecorino’ or ‘fossa’, sausages, honey, toys, clothes, hats, books, umbrellas, shoes and, of course, the yearly fair ‘thing-a-majig’. As I wrote in my post last year: ‘Each year someone comes up with the ‘discovery-of-the-year’ item that is supposed to make each housewife the most fulfilled housewife in the world. The eighth wonder of the world is usually a miraculous rag to clean windows, a magic knife to make roses out of zucchini and/or carrots, a lemon squeezer you just have to push into the lemon (I got it two years ago and never used it!). This year the big fuss (?) was about a hand powered mixer (that you activate pulling a rope).

What I love the most, though, are the ‘sidewalk shops’ organized by children. Children selling their old toys, books, stuffed animals. So cute and so sweet. When we went to Paris in August, there were two adorable red-haired children standing in front of a chair at the Jardins du Luxembourg, selling a few books. We could not but buy one (‘Toto, t’es pas un cadeau’), even if Costanza doesn’t know how to read in Italian!

This year, Costanza decided that she wanted to make a ‘sidewalk sale’. She went to the fair with her dad, Walter (our Food & Wine guy at WLB) and with auntie Chicca, the real creative talent of our house. Well, after about one hour and a half (that’s how long our daughter resisted!) Costanza earned 10 euros. Sheearned 10 euros, but on the way to and back from the fair, auntie Chicca and Walter spent about 20 euros to get her a Minions red hoody and a wallet.