Mini ‘Ciambelloni’ – a healthy snack for children at school 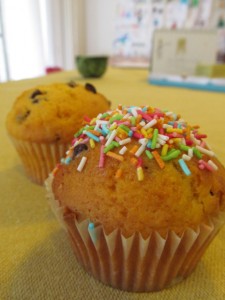 Three days ago Costanza, our 6-year-old daughter, started attending primary school. While helping her out with her smock and backpack at home, trying in the same time to make her a decent pony-tail (how come other mothers know how to dress their daughters’ hair with perfect braids and I can’t even make her the simplest of tails?) and figure out where the heck where her shoes, Costanza goes: ‘mummy, what about my snack’ (which in Italian sounded like: ‘mamma…e la merenda?’).
Yes, what about her snack?

Suddenly I had a vision. Did you see the movie ‘Airplane’ (of course you did), the scene where everyone panics and the flashing writing goes first: ‘DON’T PANIC’, and after a while it turns into: ‘OK  PANIC’?

My vision was: perfectly well-groomed little girls seated at the desk around Costanza, taking out of their backpacks healthy, home-made, organic ‘merende’, lovingly prepared by their mothers/grandmas/baby-sitters/nieghbours (!), whereas Costanza – with her wild hair – would open her rucksack, finding inside a box containing a packaged snack. Shame on me and on my progeny up to the 7th generation!!!

Well, the first and second day we actually sent her to school with Mulino Biancocookies (I know I shouldn’t write this… not Mulino Bianco!), but this morning, well, Costanza went to school with a healthy, organic, home-made ‘merenda’ baked by the two of us: mini-ciambelloni!

But what is ‘ciambellone’? As Walter wrote on this blog a few years ago: “Ciambellone” (literally, “big donut”) is a typical family cake of the spongy, sandy variety, very common in the Marche and subject to so many variations that a cook friend of mine one day noted that the Marche have about a hundred typical cake recipe, all of them a ciambellone” (Hi Rolando!).

Arguably the dullest cake on Earth, the ciambellone’s disarming simplicity can become addictive. At breakfast, it’s healthier and more satisfying than biscuits, and tastier than bread while still being spreadable (I suggest raspberry marmalade).

Also, its simplicity makes it a perfect candidate for last-minute occasions.

Costanza and I, instead of baking a traditionally-shaped ciambellone (i.e. with a hole in the middle), decided to make some mini-ciambelloni, snack-box size: the healthier snack ever, OGM/palm oil/additives free and guilt free 😉

If you want to try our typical ‘ciambellone’, have a look at grandma Lella’s recipe HERE.