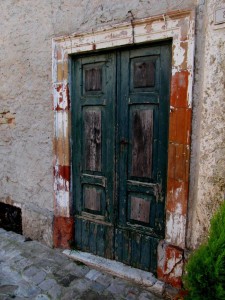 VALLEFOGLIA – When I say ‘Italy’, what is it exactly that you think of? That is the question I asked a few friends of mine living abroad. Their answers: Prada, Michelangelo, mafia (sigh), Tuscany (forget it, now Marche is the new Tuscany 😉 ), wine, ‘la dolce vita’, Ferrari (sorry, Francine, I didn’t ask you – I’m sure I would have gotten quite different answers 😉)

Well, being Italian, the things that sound/look Italian to me when I try to capture ‘moments of Italianity/Italyness’ are the following: a key into a keyhole outside a house door, a brick entrance gate to an ancient village, a Madonna with child on a wall, streets (possibly narrow) of cobblestone, a pastel pink countryhouse with dark green shutters, a panoramic view on gentle hills with the sea at the far end of a breathtaking sight, cats, laudry hung out to dry…

If all this sounds ‘Italian’ to you too – and if this sounds like a place you would like to go and visit – well, you just have to head to Montefabbri, one of Italy’s most beautiful villages (‘borghi’) in the province of Pesaro and Urbino (Marche region). The following pictures talk for themselves.

However, let me give you a few hints (of course, if you do come, just let me know and I’ll show you around!).

First of all, you have to arrive to Montefabbri from Colbordolo. This will allow you to enjoy your first view on the village enclosed by the city walls from high above and you will be amazed by its simple beauty.

Second: Montefabbri was the birthplace of Giansante Brancorsini who took his vows at the Franciscan convent of Mombaroccio after a dramatic event in his life in 14th century (while trying to separate two fighting friends, he accidentally injured one of the two who later died of an infection). Giansante Brancorsini, born of a noble family, moved to the Franciscan convent in order to expiate his sins.  He gained popularity thanks to his strong faith and to the many prodiges achieved while alive (among which the taming of a wolf; the miracle of an oak tree which, after receiving his blessing, started producing acrons with a little cross on them). Today it is a destination for pilgrimages and, if you visit Montefabbri, you should pay a visit also to the beautiful convent of Beato Sante (about 25/30 minutes away).

Third:  stop at the ‘Arci’ circle (I looked up in an online dictionary and I found this entry for ‘Arci circle’: ‘an old left wing political circle’…) and get a coffee there. You will be able to see the elderly of the village playing cards (‘briscola’ mostly) or watching sports on TV, and you’ll come across some good ole’ genuine cursing (isn’t it true that, when we were young, the first things we wanted to learn in a foreing language were: ‘I love you’ and a couple of good cursing? – good thing that, later on, we found out that there is more to a conversation than swinging between these two extremes… even if I must admit it: we Italians curse a lot!). Anyway, going back to the Arci circle, you’ll find it on your left, past the entrance gate, after some thirty steps.

Fourth: you may want to pay a visit to the Pieve di San Gaudenzio dating back to the 11th century and restored in the 16th century. If you are really lucky you are likely to experience one of the following 2 situations. Situation #1: the church is open; situation #2: the church is closed but the lady with the keys to the church hears you walking through the village narrow (I mean, really narrow) streets from inside her house and walks after you screaming ‘don’t go away!’ (as it happened to my sister last Tuesday while visiting Montefabbri with an acquaintance). 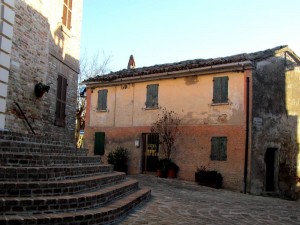 Fifth: if you are a cat lover, bring your camera along. I mean, I know you can take good pictures with your smartphone as well. Still, you’ll come across many cats in the village (in Spring and Summer) in quite a few awesome ‘typically Italian’ settings, and you will be regretting not bringing your camera along (at least, don’t say I did not warn you!).

Sixth, seventh, eighth… (you could go on forever when it comes to Italy!).

The rest is pure magic.